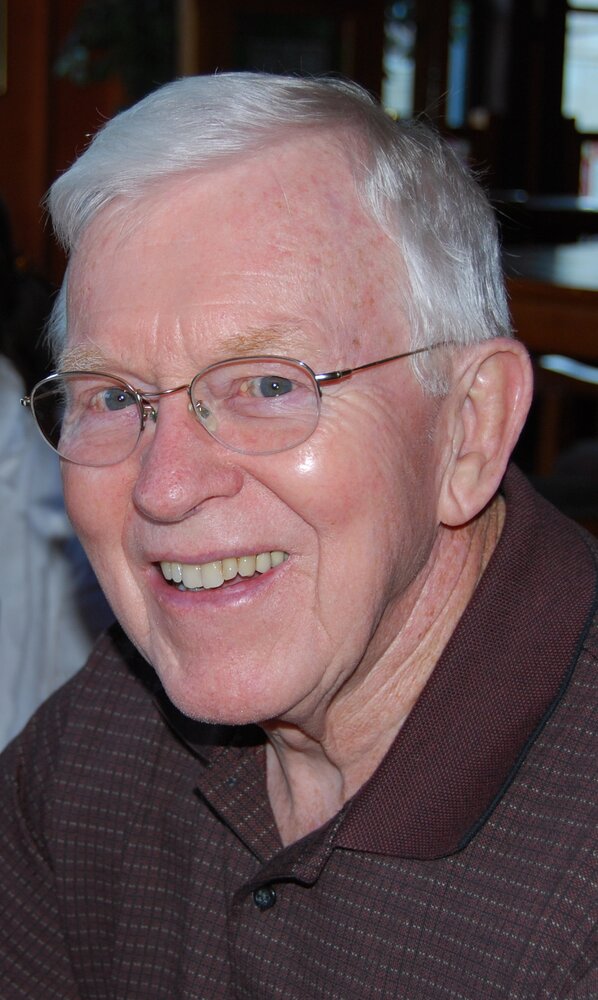 Please share a memory of John to include in a keepsake book for family and friends.
View Tribute Book
John Francis Sweeney was born in a farmhouse in Bernard, Iowa August 6, 1928, and passed from this life after many adventures at the age of 94. John died with his children Mike and Karen by his side on December 15, 2022 in Cincinnati, Ohio. It was in that wood stove heated farmhouse that John was born the second of six children to James and Mae (Kingsley) Sweeney. His mother encouraged his education and he trudged over snow filled hills to attend school and eventually becoming an accomplished real estate attorney. He attended District #8 one room country school for eight years and graduated from Loras Academy in Dubuque in 1946. After serving in the Army in Japan in 1946 and 1947 he returned to Loras College, then graduated from the University of Norte Dame Law School with his Juris Doctor degree in 1952. He then served in the US Air Force at Kessler Air Force Base in Biloxi, Mississippi where he met and married Ella Bohm and they had their first daughter. In 1956 they moved to West Des Moines where he worked at the law firm of Margulies, Sweeney & McDonald and he specialized in real estate law and had a son and another daughter. In 1968 he jointed Life Investors in their real estate deaprtment. He took his knowledge into practice in eventually developing his own real estate investment company. John was also active in the Catholic Church and was a deacon and along with his wife Ella a long term volunteer in the Hospice program. An avid traveler, John visited nearly every continent and was especially fond of his visits to his ancestral lands of Ireland and County Cork. He was a keen bocce ball player and won many an award for the men’s team in Florida. He loved sailing and being on the ocean. He mourned his wife Ella who died in 1989. John later married Diane (Sigler) Buntz of Marion, Iowa. He is survived by his children, Patricia (Donald Kaesser)Sweeney of West Des Moines, Iowa, Mike (Natalia) Sweeney and Karen Sweeney Hanner, both of Cincinnati, Ohio; and his grandchildren Patrick Garms; Mikhail, Ella, Nikolai and Konstantin Sweeney; Nicole (Jake) Barnhorst, and their children Eva, Owen, Landon and Brynn; and Colin (Joanna) Hanner and their children Maya and Lucy; his brother James (Lois) Sweeney; and the family of Diane Sigler Sweeney. He is predeceased by his wife Ella Sweeney, Diane Sigler Sweeney, siblings Robert, Bill, Mary Clare and Ann Sweeney, and grandson Ryan Garms.

Look inside to read what others have shared
Family and friends are coming together online to create a special keepsake. Every memory left on the online obituary will be automatically included in this book.
View Tribute Book
Services for John Sweeney
There are no events scheduled. You can still show your support by planting a tree in memory of John Sweeney.
Plant a tree in memory of John

Share Your Memory of
John
Upload Your Memory View All Memories
Be the first to upload a memory!
Share A Memory
Plant a Tree