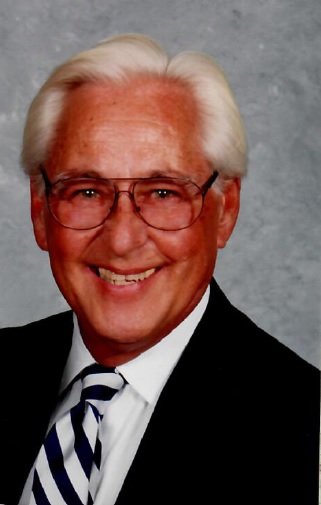 Don E. Fowls, beloved husband of Diana Fowls, passed from this earthly life to his eternal home with his Lord and Savior on November 10, 2019 following an extended period of failing health.   Don was born to Ralph “Mike” Fowls and Nina Balhoff Fowls in Detroit MI on January 30, 1928.  He was their only child.

Don attended Withrow High School, where he graduated in 1945.  Upon turning 18, Don enlisted in the U.S. Army, First Cavalry Division. As World War II was winding down, he was deployed to Japan as part of the Occupation Forces.  He served there from 1946-1948.

Don returned home and enrolled at the University of Kentucky, graduating in 1951 with a B.S. in Commerce.  He was a member of Sigma Chi Fraternity and maintained a life-long involvement, serving as president of the Sigma Chi Alumni Association in Cincinnati.  While at UK he met Lois Johnston (deceased), whom he married shortly after graduation.  Their two sons, Don J. and Mark, were the joy of Don’s life and he emphatically embraced fatherhood.  Don was active in the Concord Knothole Baseball Association and served as president of the Indian Hill Athletic Boosters Association.  Don was a member of Kenwood Country Club for over sixty years and played golf and tennis there for many years.

Don was an enthusiastic, successful businessman.  After graduation, Don was first employed by 3M and soon left that company to eventually become president of the Wm. T. Johnston Co. and start D-F Enterprises, Inc.  Don introduced changes in operations that led to great growth in sales.  After his time at Wm. T. Johnston Co. Don took his business, sales, and leadership skills to Schrader Scoville Fluid Power in Wake Forest, North Carolina and later, to Logan Corporation in Huntington, West Virginia.   Both companies benefitted greatly under Don’s tenure.

Returning to Cincinnati, Don formed Machinex, a distributor of dry cleaning equipment.   Unfortunately, he proved very allergic to the fumes in the establishments he had to visit, and eventually sold the business.  His industrially- acquired asthma incapacitated him and forced an unplanned, early retirement.

However, the saying “When God closes one door, He opens another” proved to be true in Don’s case.  His early retirement and dedication to men’s ministries led him to start a local chapter of The International Fellowship of Christian Businessmen (IFCB), a nondenominational group of businessmen and professionals.  IFCB provides opportunities for fellowship and leadership training, and teaching men how to apply biblical principles in their work situations.  This local chapter of IFCB has met continuously for 376 monthly meetings with no interruptions and continues to encourage and inspire men today.  In 2011 Don was awarded the “Distinguished Service Award” by the Cincinnati chapter of the IFCB and in 2012 he was named President Emeritus.

In 1990, Don married the former Diana Stewart Adams.  Diana’s four children expanded their family.  Together they became Grandpa Don and Grandma Gigi to 18 grandchildren and 3 great-grandchildren. Don’s love for the Lord first, followed by his love and devotion to his family, has enormously impacted many lives, both young and old.

Funeral services will be held on Saturday, November 16, 2019 at Madeira – Silverwood Presbyterian Church, 8000 Miami Road in Madeira.  Visitation begins at 10:00 a.m. with the service at 11:00.  Interment will follow in Oak Hill Cemetery, 11200 Princeton Pike, Springdale.

Memorial gifts in Don’s name may be made to Madeira-Silverwood Church, 8000 Miami Road, Cincinnati, Ohio 45243, or the charity of your choice.

Share Your Memory of
Don
Upload Your Memory View All Memories
Be the first to upload a memory!
Share A Memory
Send Flowers