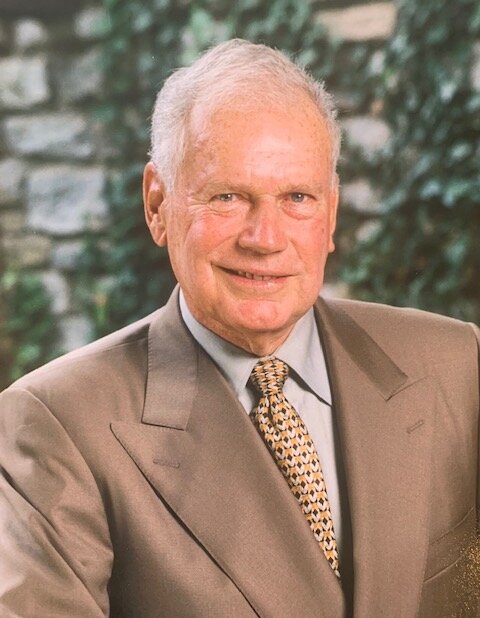 Please share a memory of Robert D. to include in a keepsake book for family and friends.
View Tribute Book
Bob Lindner was born August 5, 1920, in Dayton, Ohio, to Carl and Clara Lindner. He was the second of four Children: Carl Jr, Richard, and Dorothy Kreuzman. The family moved to Indianapolis and later Cincinnati, as his father started a dairy business in each city, with varying success. They were a very close, hardworking family that required everyone’s involvement to make their ventures successful. During the great depression, Bob dropped out of Withrow school after the 8th grade, to work full time in order to support the family business. He was always proud of the fact that a kid who never graduated high school could end up being successful in the business world. The family finally found success when they opened United Dairy Farmers in 1940. Bob’s sister, Dorothy, always said the ‘United’ in UDF was chosen to represent the family unity necessary to find success. In 1942, Bob joined the Army Air Corps and was trained as a weatherman/cryptographer. He was eventually stationed in the south pacific. It was the military that instilled his lifelong dedication to physical fitness, a practice he kept up until his final days, through a weekly schedule of home fitness instructors. His military experience also established his love of country and support for our veterans. He was an active supporter of the USO and was proudly awarded “The Spirit of Hope”. Bob was stationed on the islands of Guam and Saipan before returning home on the USS West Virginia, after three years of service. It was also the war that led to the introduction of his future wife. An army buddy gave him the name of a girl he knew from El Paso, who had recently moved to Hamilton, Ohio. Bob and Betty (nee Johnston) Lindner were later married and were inseparable as they spent the next 66 Years raising four boys. They loved traveling the world with friends and family, boating in Florida, and enjoying the majestic beauty of Colorado. Bob spent his early years at UDF managing milk and ice cream production. He was instrumental in R&D, developing ice cream flavors, hot fudge & UDF malt base. Under the leadership of carl jr., the company ventured into other businesses, including Thriftway supermarkets, Hunter Savings and Loan, Provident Bank, and American Financial. As the business and families grew, the brothers went in different directions and Bob remained at UDF, his first business love. He oversaw UDF’s operations until what he would refer to as ‘his proudest moment’, when his sons were old enough to join him and eventually oversee the business. A family camping trip to Colorado in 1969 exposed bob to the beauty of the Rocky Mountains. He fell in love with the western way of life and spent the next several decades acquiring over 15,000 acres of ranch land in northern and southern Colorado. He often referred to them as ‘his Rembrandts’. Establishing the land as a cattle ranch operation, Bob discovered his passion for ranching. Bob was a steward of the land and was committed to maintaining the Ranching heritage. preserving these properties from development became a priority that led him to place the land into a conservation easement, establishing his “legacy of the west”, by protecting it from future development. Most importantly, bob’s life was defined by his faith. His lifelong dedication to Christ started as a young boy, was strengthened during the war, and grew even deeper through his marriage to Betty. He was a generous man who realized his good fortune came by blessings from God. As a result, he spent his energy and resources sharing this message in an effort to lead others to expand their Christian faith. He was honored to be awarded the masonic 33rd degree. Bob passed on early Wednesday morning in his home surrounded by his four boys. He was 101. Bob was preceded in death by his wife, Betty Johnston Lindner. He is survived by his children: Robert (Paula) Lindner Jr, Jeff Lindner, Brad (Marsha) Lindner, David (Joann) Lindner; grandchildren: Jolie Lindner, Jill (JP) Boldt, Trisha Flynn, Robert (kali) Lindner III, Leela (Martin) Metz, Sita Lindner, Emma (John) Gill, will (lee) Lindner, Sadie Lindner, Avery Lindner, Andrew Lindner, John Lindner; great grandchildren: Olivia, ante, Keira, Hayden, Campbell, Brooks, Thea, Trevor, Huxley, Piper, Frankie, Arlo. A private visitation will be held at 11am on Monday, February 21, at Montgomery community church, 11251 Montgomery Road, Cincinnati, oh 45249, followed by a private celebration of Bob’s life. In lieu of flowers, memorial contributions may be made to City Gospel Mission, Teen Challenge Cincinnati, or Cincinnati Museum Center. To send condolences to the Lindner family or to make donations, see our website, ThomasJustinMemorial.com.

A Memorial Tree was planted for Robert D.
We are deeply sorry for your loss ~ the staff at Thomas-Justin Memorial
Join in honoring their life - plant a memorial tree
Online Memory & Photo Sharing Event
Online Event
About this Event

Look inside to read what others have shared
Family and friends are coming together online to create a special keepsake. Every memory left on the online obituary will be automatically included in this book.
View Tribute Book
Services for Robert D. Lindner
There are no events scheduled. You can still show your support by planting a tree in memory of Robert D. Lindner.
Plant a tree in memory of Robert D.

Share Your Memory of
Robert D.
Upload Your Memory View All Memories
Be the first to upload a memory!
Share A Memory
Plant a Tree