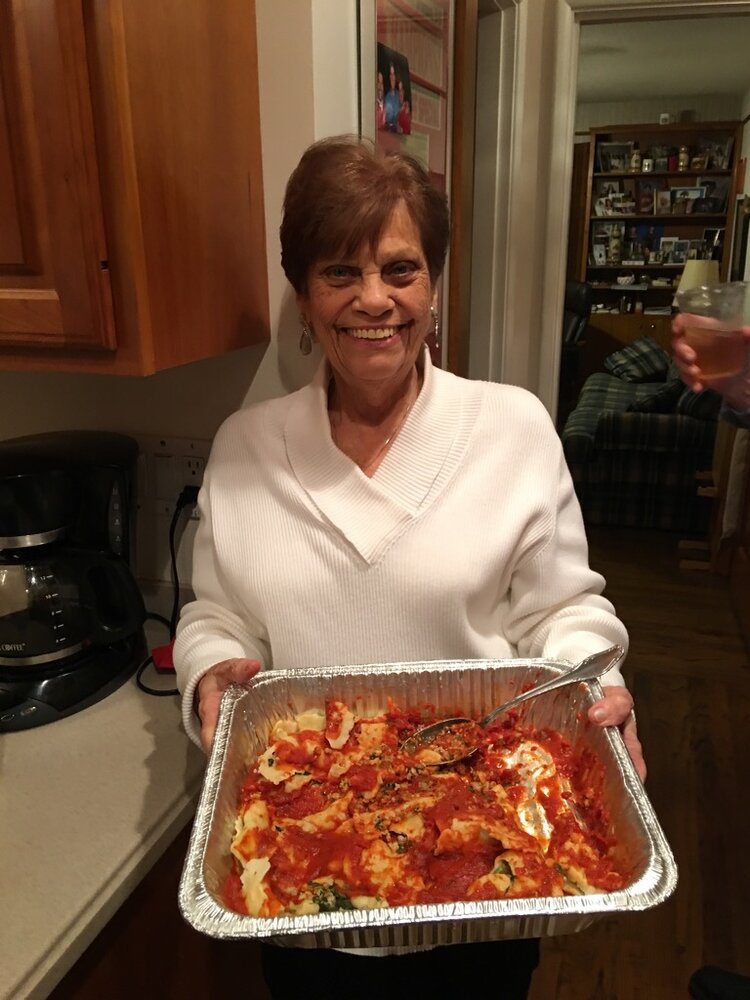 Please share a memory of Augusta to include in a keepsake book for family and friends.
View Tribute Book
Augusta Marie Zang A great mom and grand gal. Known for her incredible personality, extraordinary Italian cooking and caring mentoring. When you met Gussie, you felt welcomed. She loved family gatherings, meeting with friends and playing bridge. She was an original partner and matriarch of Highland Heights Skyline Chili. She volunteered for many organizations over the years including leading the St. Saviour Senior Citizens Club and the St. Saviour Spaghetti Dinner. It should go without saying that she will be missed by many, many people. But she will be missed most by her husband of 64 years, Jerome Zang, who said with her Italian and his German heritage it always made for an entertaining house. Her four children, Jerome "J" (Maria) Zang, Cathy Wehmann Cunningham, Kenneth (Kim) Zang and Douglas (Becki)Zang. She will also be deeply missed by her grandchildren, whom she adored, Jessica Wehmann, Tyler Wehmann (Stephanie), Nicole Wehmann Johnson (David), Anthony Zang, Cassidy Zang, Michaela Zang, Teensy Zang, Dougie Zang, Joey Zang, Kenny Zang, JJ Zang, Marissa Zang, Lexie Zang, Nathan Cunningham, Cody Cunningham. And her great-grandchildren, Hailey Wehmann, McKenna Johnson, Brooklyn Johnson, Katie Johnson, Bella Johnson, Kendall Wehmann, Joey Wehmann. She is also survived by her loving sister, Mary Ann Ross, sister-in-law Carol Zang, and brother-in-law, Nick Pitocco. Gussie was preceded in death by her parents John and Marie (nee Tedesco) Cianciolo, brother, Fred Cianciolo, sister, Delores Pitocco, and sons-in-law, Bill Wehmann, and Tim Cunningham The family will receive friends on Saturday, January 29th from 9:00AM until the time of Mass of Christian Burial, 10:00AM, at St. Saviour Parish, Rossmoyne, 4136 Myrtle Ave. (45236). Interment will immediately follow at Gate of Heaven Cemetery. In lieu of flowers, donations may be directed to either Society of St. Vincent de Paul, 1125 Bank St. (45214) or online at SVDPCincinnati.org, or to Vitas Hospice, 151 W. Galbraith Rd. (45216), or online at Vitas.com
Saturday
29
January

Share Your Memory of
Augusta
Upload Your Memory View All Memories
Be the first to upload a memory!
Share A Memory
Send Flowers
Plant a Tree