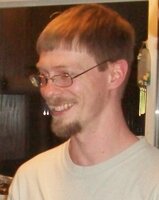 Thorin Michael Lanham, age 47, died suddenly on May 4th. He was the beloved son of his mother Helen, his father Larry, and stepfather Bob. Survived by aunts, uncles and cousins in Wisconsin, Minnesota, and Cincinnati. He had childhood friends, who he kept and loved. Thorin loved music, especially live music, and just about any musical genre. Avid collector of music and music memorabilia, his CD collection was vast. His concert T-shirts were his treasure that helped him reminisce of good times spent with his friends. He prided himself for keeping up with the latest music trends. Thorin was well-known as an avid video game fan, having multiple gaming systems and games he played. Many stories of his prowess have been told. Thorin was a car enthusiast and could ID a car by a taillight or a headlamp. He liked the exotic cars and liked to see what the rich and famous drove. Thorin was a hard worker, detail oriented, and took pride in a job well done. He worked for Champion Graphics in Fairfax for many years as a printer. He loved his job and made many friends with the coworkers there. If you see a bottle of Gorilla Glue, it’s very likely Thorin printed the label for it. Most of all, Thorin was a good son, good friend, and a kind man. He liked to cook, and he liked to have parties in the backyard around the firepit. He liked to make people laugh and had a great sense of humor. A memorial service will be held on Thursday, May 19th at 5:00PM at Thomas-Justin Memorial, 7500 Montgomery Rd. (45236) Kenwood.