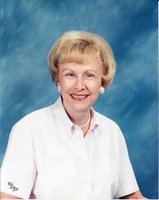 BALZ Muriel Lee (nee Bahlman), was born October 22, 1929 in Cincinnati, Ohio to Milton and Gladys (nee Beyland) Bahlman. She grew up in Ft. Thomas, Kentucky, went to Miami University, where she graduated Phi Beta Kappa and Pi Delta Phi and Delta Gamma social sorority. She met Cliff Fischer while working as a translator in Cincinnati and they were married in 1953. They had 2 sons, Ken and Wayne. She was a stay at home wife and mother until Cliff was diagnosed with ALS in 1972. At that time, she began to take an active role in the two companies Cliff founded in 1957, Fischer Industrial Equipment and Fischer Pump and Valve Company. After his death in 1975, she continued to operate the business until her retirement at age 62. In 1980 she married her second husband, a widower, Dr. George Balz. They began to do extensive traveling to most countries in Europe and many US and Canadian destinations for the next 25 years. Muriel was active in the Cincinnati Women’s Club, Travel Club, the University Club, among others. In addition to travel, they were season ticket holders to the Cincinnati Opera and the Naples Ballet in Florida. They spent idyllic times at their cottage on Seneca Lake, New York and winters at their condo in Bonita Springs, Florida. She was preceded in death by her parents, two husbands, and one grandson. Survivors include Ken (Darian) Fischer, Wayne (Leigh) Fischer, and three adored granddaughters, Lindsay, Kendall and Regan. Muriel’s services will be held privately, due to current social restrictions. If desired, donations may be made to the ALS Association, at www.als.org.