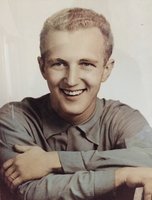 Norbert Howard Nerl, loving husband of Elizabeth”Betty” (née Rupard) for 68 years, preceded in death by his parents Howard and Rosella (née Duesing), and sister Doris (Steve) Petko. Father of Dale (Margaret), Gregory, David (Carolyn), and Tom (Julie). Grandfather to Emilie, Claire, Chris, Keri, Marcie, Sean, Jamie, Pat, Kevin, Eric and Sophie, great-grandfather to ten. Passed away peacefully on the morning of Saturday, May 23, 2020. He was 88 years old. Proud alum of Roger Bacon High School where he played in the band, and of the United States Coast Guard, where he served in Coos Bay, Oregon. After 35 years of service, he retired from Kirk and Blum Manufacturing. A long-time member of St. John Vianney Parish, Norb served on many committees and volunteered in many capacities, including Turkey Festival Chairperson, unofficial library shelf builder for Cure of Ars School, and coached many neighborhood boys in football, basketball, baseball, and in later years, men’s softball. He umpired softball for many years for the Al Goodman Umpires Assn and the Ohio Valley Umpires Assn at many local fields, but especially at Avoca Park. Norb was the scorekeeper for the Purcell Marian varsity basketball team for many years, including the 1985 Ohio AAA Championship season, and later served as ticket manager for Purcell Marian football and baseball games. In his later years, Grandpa Nerl kept score for many other teams, including Mariemont High School baseball, Southwest Ohio Baseball teams, and CYO basketball teams. On game nights and performance nights, he and Betty could be found at their grandchildren’s games and fine art performances. Mass of Christian Burial Will be held on Friday, May 29th at 10AM at St. Margaret-St. John Parish, 6000 Murray Ave. (45227). Interment will follow at Gate of Heaven Cemetery. In lieu of flowers, the family requests donations be made to St. Margaret- St. John Parish or to the Mariemont Schools Foundation Angel Fund, 2 Warrior Way, Cincinnati (45227) to assist families in the district that are in need.